Two Chairs to My Left in a Cafe 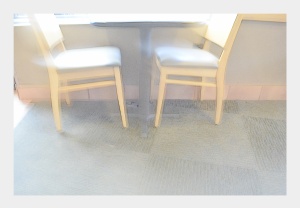 A photo/art/pic of part of the TV room/den and part of the kitchen in the house in which I live.

There’s this guy I follow on Instagram who has the perfect face, the perfect body, but he is straight. And then one evening I find myself in the club where he is bartending, and he seems to have the perfect personality: jovial, funny, engaging. But I find something is off: he seems to be pandering, like he is trying too hard to be liked. He seems to be continually “on,” that the his overall effect to me seems stilted, and scripted. And then I find myself turned off – his fantasy was better than his (admittedly good) reality. That’s how I feel about “Magic Mike XXL.”  The first movie was hugely successful, and I liked it enough for me to look forward to the sequel. And the movie delivers, in the sense that it is a more character-driven piece than the first one, as if there was a conscious effort…

Hello users of the interwebs! When you’re trying to learn and become a photographer it can be very stressful and hard searching for the right resources. You go online and you’re bombarded by information and you can’t sort through all of it. I decided to put together a list of resources for photographers so that they can use these resources to become better and more knowledgable photographers. the best thing about all these resources is that they’re free! What do expect though from a guy who’s home page says a broke photographers journey. As always if you have any questions or suggestions feel free to comment or email me.

I personally believe photography books are one of the greatest sources of information for photographers. They can inspire you and show you unique styles of photographers that you can adapt and change and then add to your shooting style. Photography…

#SDCC: ‘X-MEN: APOCALYPSE’ Posters Handed Out At #ComicCon, Check It Out

beeing a blogger and not posting this video is impossible, so i recommend you to sit back and relax…i laughed so hard during this 30 minute film, it is really good!!!

Kung Fury is an over-the-top 80’s action comedy that was crowd funded through Kickstarter. It features Kung Fury, a Kung Fu renegade cop who travels back in time to kill his Nemesis, Hitler. The film features nazis, dinosaurs, vikings and cheesy one-liners.

and don’t forget to never hassel the hoff…hahaha

Not Another Movie Site

Rarely in film these days do we get to see a classic thriller. A film that unsettles you and makes you cringe in our day and time is almost always a member of the horror genre. Films that make us question those around us and those we come in contact with have become scarce in the modern film landscape. There are plenty of deities and demons to be had, but the simple, frightening notion that evil can take shape in a very human and realistic form seems to be lost on a lot of actors and filmmakers. However, there are some students of the game out there, and fortunately for us they help make movies like Nightcrawler.

Nightcrawler is not a horror movie, but it is one of the most unnerving films I’ve had the pleasure of seeing. This is mostly due to the main character, Louis Bloom. Bloom, played…

Today’s feature is the infamous McDonald’s commercial and “E.T.” knockoff, “Mac And Me.”

“Mac And Me” was written and directed by Stewart Raffill, who is best known for the films “Mannequin: On The Move” and “The Philadelphia Experiment.” The film was also co-written by Steve Feke, who has penned such flick as “When A Stranger Calls” and “Poltergeist III.”

The cinematographer for “Mac And Me” was Nick McLean, who also shot movies like “Spaceballs,” “The Goonies,” and “Stroker Ace.”

The score for “Mac And Me” was provided by Alan Silvestri, who has accrued well over 100 composing credits for films including “Van Helsing,”“Super Mario Bros.,” “The Avengers,” “Forrest Gump,” and “Predator 2.”